There are two basic bending techniques:

Requires forces equal to 4 or 5 times that of air bending; nevertheless makes it possible to obtain a remarkable angular accuracy by die stamping the inside radius, which cancels the elasticity of the metal.

During bending, the worksheet maintains part of its elasticity. It is, therefore, necessary to execute a more closed angle than the angle required, in order to compensate for the opening due to this phenomenon. The computer integrates all the parameters required for air bending. Our standard air bending tools are designed in light of this. The bending chart on the electric cabinet of the press shows the forces required and the inside radii obtained as a function of the other characteristics (thickness and quality of worksheet, die opening, etc.).

The deformation of the worksheet is interrupted before the worksheet is brought to the penetration limit in the die. The worksheet is in contact with the tools at three points, A, Band C, as shown in the figure below. The practical result of this special feature is that it maintains the quality of the bending: Die = 8 to 10 times th (for angles ≥ 135°, it is preferable to use die = 10 to 12 times th).

NOTE:
If a special angle is required, tools can be made at the bending angle, which brings us to the technique referred to as “air bending in die bottom”.

b) Air bending In die bottom:

to make 90° bends. In this case, the worksheet goes down to the bottom of the die and rests against its sides. This leads to an increase in the force required.

NOTE:
This type of bending generally applies to worksheets greater than 2 mm thick.

This type of bending is comparable to stamping. The punch tip, when at the bottom of the die, breaks the elasticity of the worksheet, which then takes on the exact form of the punch.

Very strong forces must be used. These may go as high as 4 to 5 times the forces shown on the air bending chart. This type of bending generally applies to worksheets up to 2 mm thick. 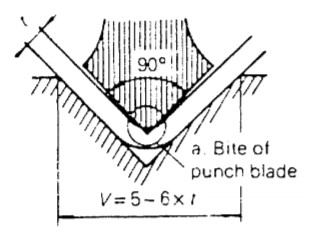 The gooseneck or special assemblies on the machine can be used to carry out punching, notching, etc. operations.

Nevertheless, certain rules should be observed in order to avoid accidents involving the press and so that operations can be carried out correctly.

Insofar as possible, punch grinding should be progressive.

FOR ALL PROBLEMS CONCERNING PUNCHING AND BENDING, WE RECOMMEND THAT YOU CALL THE TECHNICIANS IN OUR SALES ENGINEERING DEPARTMENT.

The values in the chart are understood to be for punches symmetrically distributed in relation to the axis of the beams. 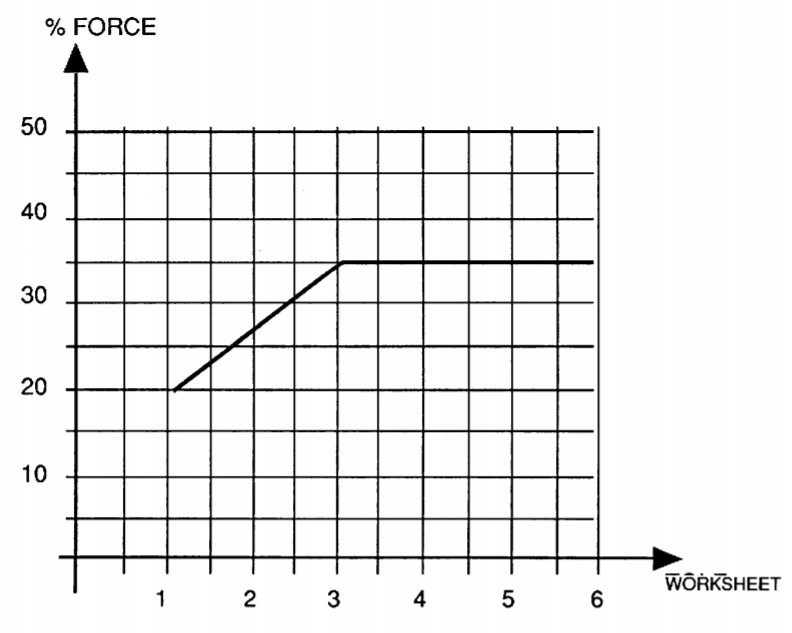 We strongly recommend that the order of assembly be kept to, for reasons of facility and safety.
1) Die or vee (V)
2) Punch or counter-vee (CV)

The dies are slid on the resting plane of the lower beam and locked home in place by the front plates. The rear plates are the vertical reference surface and must never be unlocked.

For dies with two vees, loosen their lock screws before making the punches. 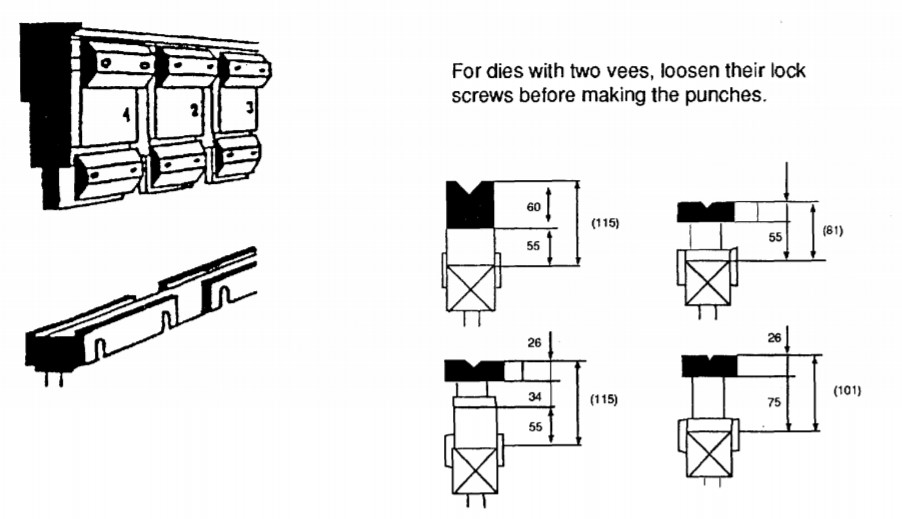 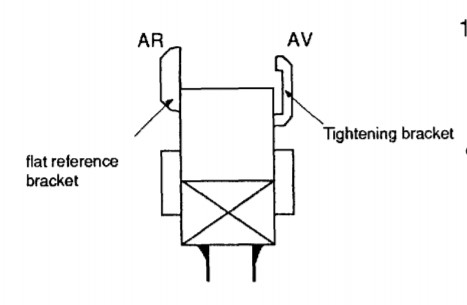 Caution: When assembling a feeder bush, make sure that the flat brackets (slick
brackets section) are at the back of the resting plane of the lower beam. These
brackets must in no case be unlocked.

– Set cycle selector on position 1.
– Press closing pedal.
– Hold down closing pedal to adjust stoppage level of lower beam (sequence or mute) using the hydraulic gauge control (vernier wheel or knob, depending on machine type. See section 9.3).
– The stoppage level must correspond to the height dimension of the punch-die assembly. 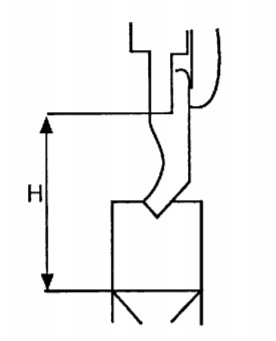 – Keeping the closing pedal pushed down, unlock the low gauge assembly by half a turn, then tighten IT back. 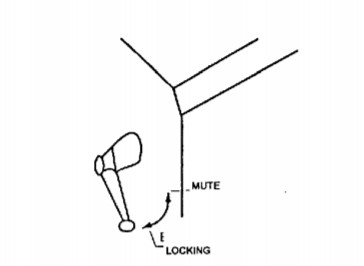 CAUTION: The maximum permissible force depends on the type of tool used; refer to the tool list.

Tools must be assembled in the following order:
a) Dismounting of punches
b) Dismounting of dies
– Set cycle selector to position 1.
– Press down closing pedal. Without releasing pedal, use the hydraulic gauge assembly control to adjust level of lower beam, so that punch and dies are in contact, then loosen and tighten the low gauge block control.
– Press down opening pedal. The clearance obtained between the tools makes it possible to slide in the punches through one of the ends of the beam.

– To protect the working edges of your tools, we advise that you store them in a special box near J the press and set them on wooden slats or soft materials.
– In case of dismounting adjustable intermediate sets for special reasons, replace these parts in order and in their respective locations.
– Dismount dies. 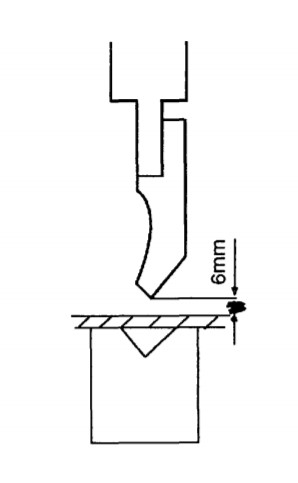 After turning on your press:
– Set press on cycle 1 (H switch)
– Set plot stoppage (I) switch to 1.
– Press down closing pedal. The lower beam rises to the sequence level initially set.
Check distance between punch tip and worksheet.
Actuate opening pedal to bring down beam.
Set adjusting cam so that there is a maximum of 6 mm between the punch and the worksheet (Fig. 1).
Bringing the cam back up brings about a higher sequence level. 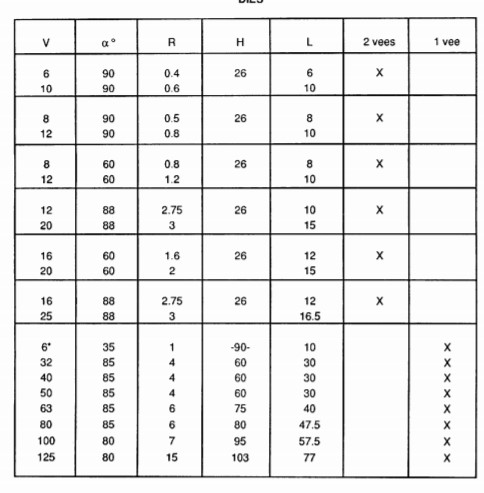 The height of the die-punch assembly can be corrected in relation to the filler block selected. See section 7.3.1 for the various assemblies.
*Crushing tools 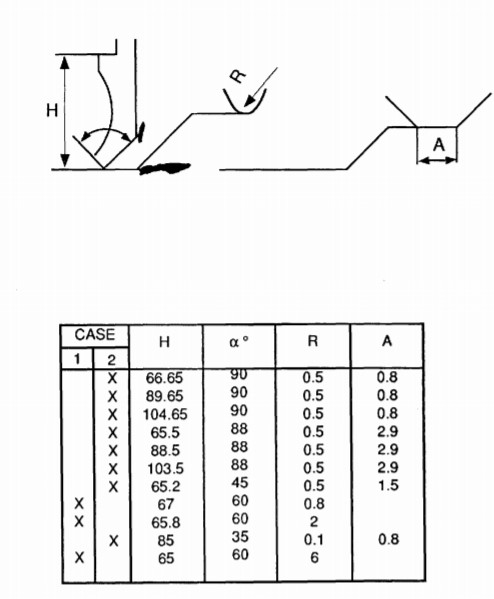 Continue to 14) – USE WITHOUT NUMERICAL CONTROL

If you are having issues with your Press Brake and need a Backgauge Control Upgrade Kit you have come to the right place.  Automec is the industry leader in Retrofitting Pressbrakes and Shears.

Our positioning systems consist of a programmable control where the operator enters a dimension and a motorized gauging mechanism automatically moves through a sequence of programmed dimensions. These systems can be retrofitted to press brakes, shears, cut-off saws and punches.