Are you looking for Accurpress Controls and Control options?  Let’s start with what Accurpress was selling twenty years ago, as many press brake owners may be using the same old control system. Let’s face it, the mechanical components of most Accurpress press brakes are built to last, so most fabrication shops are still holding on to old technology that needs to be upgraded. Lessons learned here will save you tens of thousands of dollars on unnecessary expenses.

Accurpress Controls and CNC Controller Options - FLASHBACK to The 80s

In the late 80’s Accurpress offered its first CNC gauge, the AP2. The Accurpress® AP2 system provided basic calibration controls for the backgauge and limited job programming features. You can see from the video below; the AP2 was as basic as CNC control systems get. The look is reminiscent of old Wang, Texas Instruments, and Windows Dos-based systems, which were not known for their innovative graphic user interfaces and user-friendly features. Believe it or not, many press brake fabrication shops are still using these relics of a bygone era, and fortunately, there are still affordable replacement options. 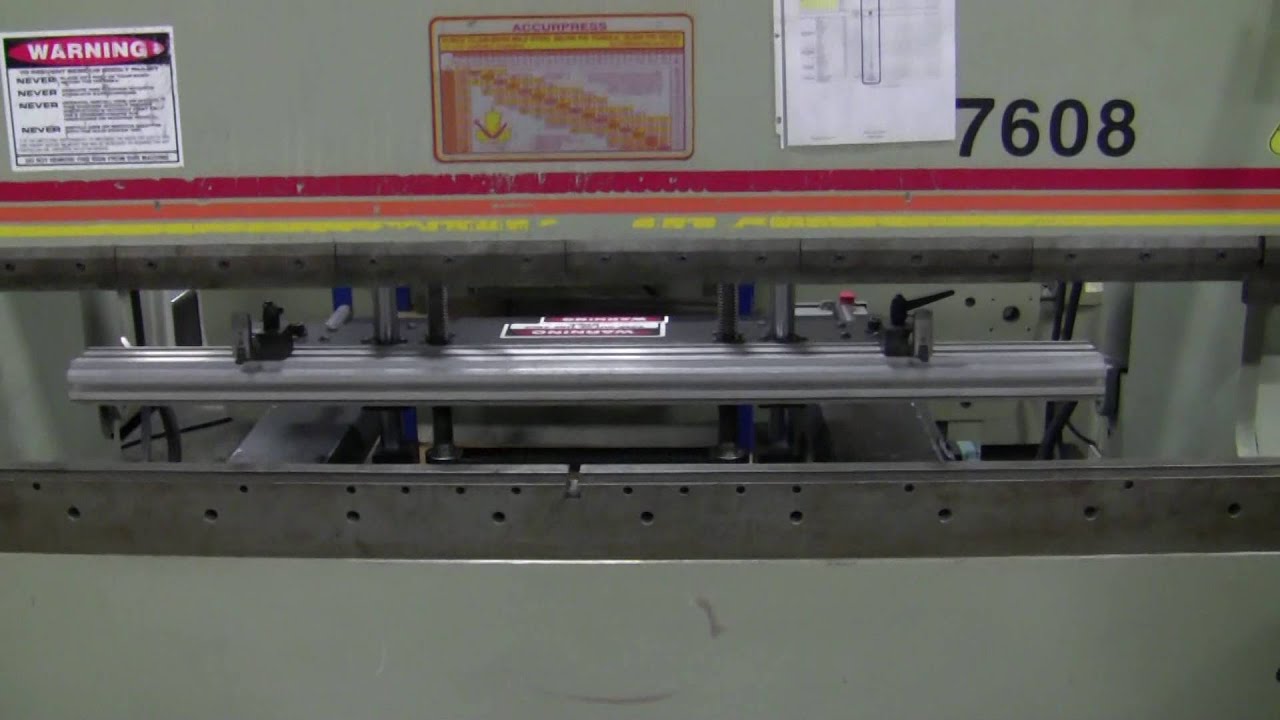 If you have an Accurpress AP2 system and want options for retrofitting instead of replacing your press brake, click here to learn how to upgrade your Accurpress AP2 CNC Controler.

Accurpress ETS CNC Gauging Control - The 90s and beyond

In the 1990’s, Accurpress upgraded to its ETS CNC Control systems. The company provided a basic ETS pedestal control with all its press brakes. The ETS Pedestal Control was described as providing “All press brake functions at one station,” however, this is no longer an accurate description since it doesn’t provide CNC Gauging Controls that are a critical component for today’s modern press brake.

The ETS programmable logic control (PLC) unit allowed press brake functions to be controlled by the operator through push-button controls over ram depth settings and tonnage limits. An LCD on the ETS showed the program details as text, and there were no graphic controls. The unit allowed storage of a total of 16 different bend programs in its memory. The ETS was mounted on a pedestal incorporating a footswitch and dual palm buttons that gave the operator control over ram movements.

The standard functions of the control included:

While rudimentary compared with today’s modern press brake controls, these controls were sufficient to meet most press brake shops’ needs in the 1990s and early 2000.

Summary ETS Offerings in the 90s

What are my options for Upgrading my old Accurpress CNC Control?

If your Accurpress has an ETS control station, you may be able to upgrade your control to any of the Accurpress models featured above. However, even if you can find an affordable used Accurpress control system in good shape, you will find no warranty and limited support for your used equipment. The best solution may be a new third-party CNC control that comes with a warranty and full support.

There are no Accurpress solutions for pre-ETS controls like the AP2. You need an ETS to use any of the Accurpress options described above. The good news is that there are still third-party options for the Accurpress AP2. For example, Automec can utilize existing Accurpress back gauges and replace the obsolete Accurpress® AP2 with our CNC 150 or CNC 300 Press Brake Backgauge Control. As a result, you will get a great new system backed by a warranty and ongoing support.

This is where Automec, Inc. can help! Automec can upgrade existing press brake/ back gauge controls for less than 1/2 the price of purchasing a completely new system. We offer 2-axis control upgrades for most Accurpress® back gauges, including the Accurpress® AP2. We also retrofit press brake controls for numerous press brakes in the field today. Click here to learn how to upgrade your Accurpress CNC Control system.

Today Accurpress offers the ETS200 default with its Advantage Rocker Arm press brake.   The ETS design has gone through design iterations and improvements, but the features are the same: Ram and Backgauge X-Axis controls, 4 line LCD Display, 100 on Board Programs, 9 Steps/ Program, Set and save Ram Positions, Tonnage Mode Programming.   Customers have the option to upgrade to an ETS3000 for additional costs.   There is no longer an ETS2000 model to choose from.  Many Accurpress Customers choose to upgrade the Accurpress ETS with more affordable third-party CNC systems instead of the ETS3000.

The ETS 3000 has gone through numerous upgrades over the years, including a more robust Touch Screen Control and Teach Mode Programming.  Below is an overview of features:

Accurpress created a new CNC Controller called “Vision” that has the same features described above with the Accurpress ETS3000 but with additional features like automatic tool selection, quick tooling change, simple bump bending, programming of custom tools, and special bend support such as offset, hemming, and pre-bends.

The Vision Controller system is available on the Accurpress  Accell E, Accell U, and Accell H Press Brake upgrade packages.  For those customers who want to keep the ETS3000, Accurpress has made it possible for Accell U upgrade customers to continue using the ETS3000.

There is even a VISION TO ETS3000 UPGRADE option for Advantage machines that lets you use Visions’ powerful 3D bend simulator to create programs and import them into the ETS3000 control.

Present like a pro with the Moses control option.  With Accurpress Moses, you can display Vision directly onto the Accurpress Ram and use it as a touchscreen.    Walk customers and employees through the bending process, setups, and part orientation while Moses Displays a 3D visual of the program during forming.

Accurpress is an industry leader in press brake manufacturing and continues to innovate when it comes to CNC controls.  We hope this article has provided you with a history of Accurpress controls and sufficient CNC upgrade options for controlling your press brake.   Unfortunately, we don’t have pricing for the Accurpress products described in this blog post as they are changing and unavailable to us.  You will need to contact your Accurpress dealer representative for pricing information.  Ultimately you will either invest in a new Accurpress Press Brake, or upgrade your existing Accurpress machine with new or used controllers.   If you want to look at Accurpress CNC Upgrades, Automec offers several affordable CNC Backgauge Control Upgrade Kits.  In addition, Automec recently introduced our Fasfold Controller with comparable features to the Accurpress controler options described above but without the heavy investment.

You don't need to replace your Accurpress Press Brake to get advanced press brake controls with 3D simuation.

An ideal controller for new and used Amada press brakes

Widescreen Multi touch format; allows ALL important views at once on main screen.

Watch the Automec Fasfold Controller Video to see it in action.