Why the Guifil press brake was accurate and innovative in its time! 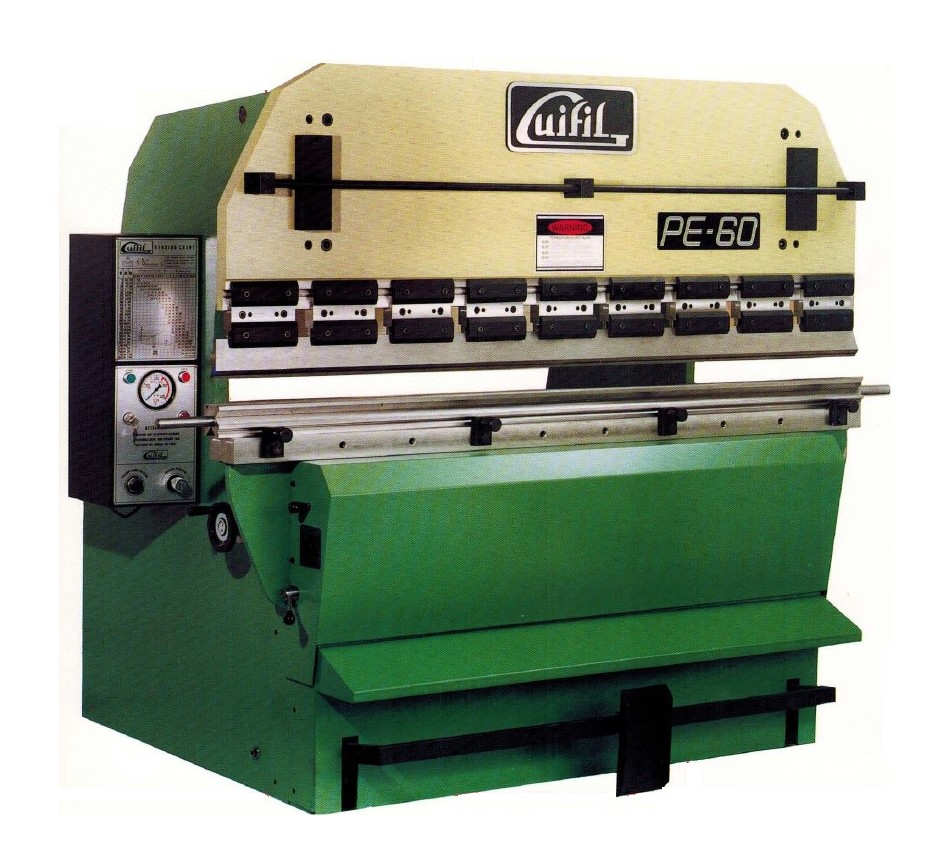 In building a Guifil press brake, the engineers set out to make the phenomenon of deflection work for, rather than against the material’s bending. Discarded was the conventional approach of a moving upper ram.

Instead, Guifil produced a press brake powered by three cylinders with a moving lower ram that can spread out the force and avoid the uneven distortion of previous designs.

This up-acting system results in a deflection curve with both beams deflect in the same directions. Also, the three-point bending pressure eliminates tedious and time-consuming shimming in the central portions of the ram. The Guifil approach increased productivity while reducing trial and error during setup.

Because the Guifil press brake is easy to use, operators can become productive after a very short learning curve.

To raise the ram, the operator steps on a foot pedal. Guifil engineers set up this pedal like a car’s accelerator – the more pressure you put on the brake, the faster the ram will rise. Having variable control over ram speed means that bending is safer and can controllable. Whip back and whip up of large sheets of material can be eliminated.

A further contribution to safe operation, the ram halts immediately and drops when the operator removes his foot from the pedal. Users can stop the ram in mid-stroke instead of completing its cycle as a mechanical press brake would.

When the operator keeps his foot on the pedal, the lower beam comes up to the precise point needed to achieve the desired bend angle. The beam stays in position until the operator lifts his foot.

The handwheel control modifies beam movement under full tonnage to change the bend angle. This feature combines with the Guifil machine’s accuracy to enable the operator to use the very first blank to create a part. Therefore, with a Guilfi press brake on the job, you won’t need 25 blanks to produce 20 parts. 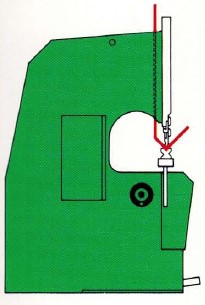 The Guifil Press Brake has a Strong Foundation.

Guifil built its press brakes with a super-rigid frame to which the An adjustable interlock system anchors the upper ram, which remained so during constant operation years.   Guifil’s deep throat design, short side frame, and unobstructed top beam extended bending capabilities. 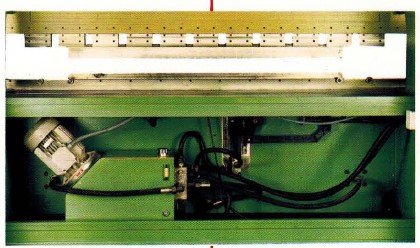 In operation, the primary hydraulic cylinder raises the ram quickly. As the punch engages the workpiece, the secondary cylinders move the ram more slowly, reducing whip up during bending. This is the only work the hydraulic system does in the Guifil upstroking system, instead of the additional effort required of a conventional down stroking system, of retracting and supporting the ram. Due to gravity, the ram retracts quickly and drops to a pre-set bottom stop.

On many competitor press brakes, this automatic 3-speed system is an expensive option. Guifil feels the safety and accuracy it ensures are essential enough to make it a standard feature! 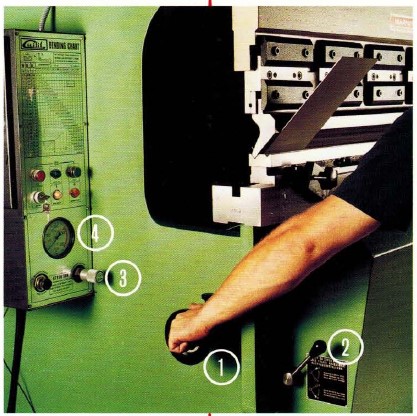 “The angular quality of a bend is dependent upon the precision of punch penetration into the die.” To reach this precision, Guifil has designed its press with hydraulic bending depth control. The operating principle is simple: when the working beam reaches the required level, it stops moving. To modify the penetration under tonnage, it is only necessary to operate the handwheel control.

The hydraulic stop allows one to form a bend at the required angle without trial and error or extra handling of the piece by a progressive control of the angle during bending.

This valve allows “manual bending” by controlling the upstroke of the beam as well as the downstroke. (This is incredibly helpful when the machine has a CNC). Bending can be achieved at a required speed when forming long or heavy plates without whip-up, therefore without “back bending.” 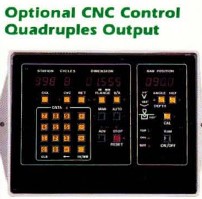 Programming is simple: the operator goes through the steps of a forming operation, calibrating the control as he goes. Stored and ready to use, the program can be adjusted immediately for variations in material thickness, temper, or size.

In production, the automatically controlled gauge positions for each successive bend, maintaining precise angles and flanges. For the next part, the gauge quickly returns to the first position and begins again.

X. Y. and R axes can be precisely pre-set and locked for repeated accurate bends. With the addition of numeric controls, all three axis positions can be adjusted automatically for each bend. 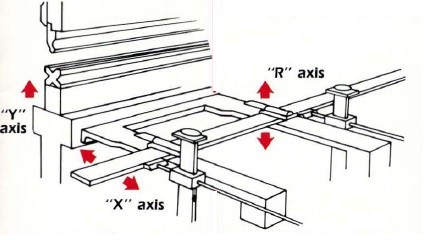 Guifil’s up acting, parallel deflection concept minimizes distortion, but the necessity for worn tooling compensation is essential to precision forming. Rather than shimming, Guifil’s sectional tool holders have adjustment wedges that are adjustable using push/pull screws and do not require tapping or hammering from the side! 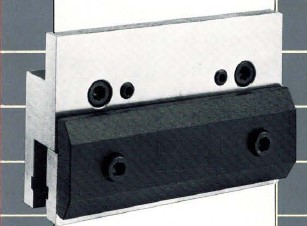 Universal tool holders accept American or European tooling and can be “stacked” to enable the forming of deep box bends and other operations not possible with conventional tooling setups. 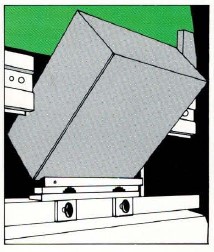 Conventional press brakes create greater punch/die penetration at the beam ends than in the center. This weakness results in a varying bend angle across a workpiece. Guifil’s upstroking ram action applies smooth, even pressure at spaced points. The bend angle is consistent across the workpiece.

The bottom beam is guided by several precision bearings spaced along the beam length. These roller bearings are prepacked with grease. No wear, no maintenance, the guides remain accurate throughout the life of the press. Beam parallelism is not a concern for setup, the eccentric shaft in mechanical brakes that drives the ram produces wobble caused by friction. Gibs (guideways) and screws designed to control wobble require lubrication and still wear quickly, reducing accuracy because of excessive free play. Guifil’s system is bearing-guided and eliminates these problems.

A breakdown of Guifil Press Brake Models and Specifications

Learn how Automec can give your Guifil press brake new life!

Although Guifil press brakes can continue to run due to their strength and durability, they usually need to be retrofit with modern controls to achieve full productivity.  In fact, there are hundreds of machine shops with Guifil press brakes operating with either faulty CNC controls or none at all. These brakes have limited production abilities and cannot complete complex projects. A CNC is a competitive advantage for most modern press brakes and comes standard with most new press brakes.  Fortunately, Automec can add retrofit your Guifil press brake with a CNC that will improve your productivity and extend your machine’s life.  Read more about the history of Guifil and why you’ll want to consider Automec’s affordable press brake retrofit!