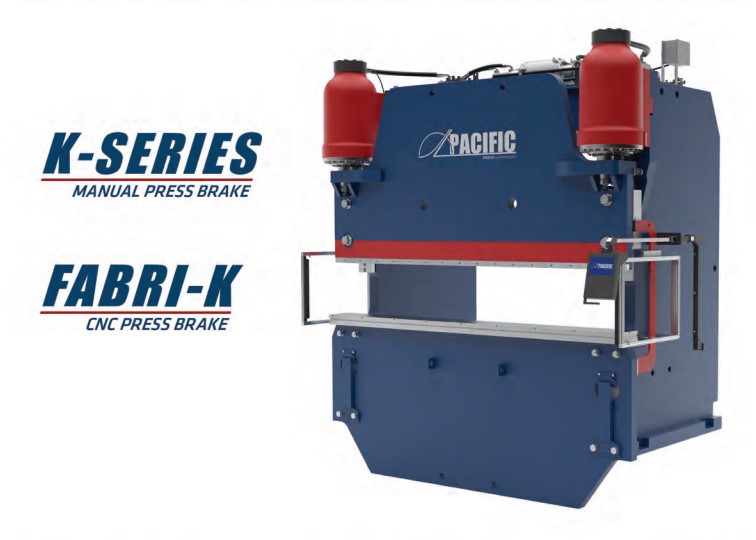 Today most Pacific Press Press Brakes are well-suited for Automec retrofits or upgrades using its CNC Control products. This article will focus on retrofitting Pacific machines with the Automec PC 800 system.

Pacific Jenesis or J-Series press brakes were one of the first hydraulic machines specifically built for high volume precision work in the smaller tonnage range. The J-series press brake is compatible with most CNC control and backgauge combinations (including Automec®)

The long stroke of a J-Series was completely adjustable with full tonnage available at any point in the stroke. This feature provided more versatility and higher bending capacities than those of similar tonnage mechanicals. The J-Series would bend more substantial material due to the extended power stroke being compatible with larger female dies and thicker materials. Every machine shop doing sheet metal work needed plate forming capabilities in the forming of brackets, angles, and clips. Mechanical press brakes in the medium tonnage range did not have plate bending capacity because thicker plates required a longer power stroke than was available.  View the historic brochures below as a reference.

Today the K-series include CNC control as an option, while Fabri-K Series machines are built with CNC in the base product. As a result, thousands of Pacific press brakes are operating on the market today without CNC Controls. Fortunately, Automec’s CNC systems have affordable and compatible retrofits for almost all of these machines.

Since Pacific Press Technologies made their press brakes to last for decades, it is possible to upgrade them with advanced features without investing hundreds of thousands of dollars on a new machine. Upgrading with an Automec CNC control can give your existing Pacific press brake new life and a higher ROI on your investment.

Get Decades More Use From Your Used Pacific Press Brake

Often, you don’t need to replace the back gauge system. Many press brakes can work with only manual control instead of programmable control. Therefore, if you do not need your original control system for your press brake to work, you can usually retrofit your press brake machine inexpensively and efficiently. As a result, retrofitting your press brake with an Automec CNC control retrofit will help you get decades more use.

In replacing your press brake control, there are options for the extent of the capabilities you would like to have. You can retrofit your press brake control to have a specific position to which it will return the machine. It could be much more advanced and be a PC-based control with more capabilities, from networking to offline programming. This feature is where the Automec PC800 comes in, as you will see below.

In addition to being far less expensive than replacing your press brake, a retrofit includes improving the productivity with features to reduce operating costs. The cost savings can consist of setup time, product waste, and improved productivity.

By retrofitting, you can:

In addition to improvements to the press brake machine itself, there have been other developments that have positively improved the metal forming industry. Chief among these have been machine and auxiliary component control, which have vastly improved labor efficiency rates. The introduction of the Human Machine Interface (HMI) has reduced Programming time as well. The vast majority of today’s press brakes include HMI features. As a result, easy to use HMI visual features help operators make more accurate bends while saving time. Robust, PC based, HMI’s include 3-D bend simulation and sequencing software, tool and program storage for easy recall and setup, and precise control of auxiliary components.

Gauging systems have solved the problems with manipulating material within the press brake. HMI systems control Backgauges preprogrammed to station the fingers relative to the bend sequence. With up to six axes of control, gauging systems allow the operator to remove the guesswork out of plate positioning.

The other component control feature introduced is Computer Numerical Control (CNC), which has created the ability to control the power unit valves precisely. CNC, coupled with the introduction in the 1980s of directional proportional and servo valves, led to producing extreme ram accuracy within .0004″.

Automec offers a variety of CNC systems and upgrades that can retrofit your used pacific press brake. The Automec PC 800 system is especially suited to the thousands of Pacific machines currently operating without a CNC.

Automec’s PC 800 is a graphical control for its family of CNC backgauges that uses digital photos and 2-D graphics to make your press brake forming easier. PC 800 allows you to simply photograph your press brake tooling and bend sequences, and integrate them to your bending program. Operators can create press brake forming programs by choosing graphical pictures of tooling from a tooling library. You can also photograph each step of the bending process as the part is being formed.

Operators can enter the desired bend dimensions and angles using the graphical touch screen (or traditional keyboard and mouse). Users add materials by selecting from a list in the control system. This visual aid for the operator and setup personnel means faster setup and fewer errors in the bending process. As you complete each bend, a photo preserves the operation, and each job can be saved and recalled for repetition later, using the Microsoft Windows control.

The PC-based system uses a Microsoft Windows operating system familiar to most people and is added seamlessly to a network. Users can program press brake jobs at the machine or offline. Multiple press brakes can share information with a simple windows network that you can set up yourself. Files and folders with a virtually infinite job and tooling storage are stored and sorted like Windows-equipped computers.

Advantages of the PC 800 over other CNC systems

The Automec PC 800 introduces the following advantages over other CNC systems:

In the Bend Wizard mode, you simply select your tooling and material, then enter the desired angles and bend legs. The 2-D graphical display shows the bend and tooling with a “before and after” illustration. Tooling interference can be detected and corrected before forming the first part.

In addition to the 2-D graphical representation of the part forming sequence, PC800 allows you to use JPEG photos of your tools and workpiece to give the operator a better visual representation of each bend. It is as simple as downloading pictures from your camera to your home computer. Photos enhance the 2-D graphic simulation because you can see the actual part with all its cut-outs, holes, and insertion hardware. You can see how the operator positions the piece on the die and the orientation of the gauge fingers.

The choice is yours

You can select top and bottom tools from a comprehensive tool library as well as various tool holders.

The PC800 lets you load a separate toolset for each bend if required. The photo feature makes it easy to reproduce these elaborate progressive die setups the next time you run by visually displaying the job when recalled.

You can create a material list that carries all parameters, including thickness, type of material, and springback characteristics. When you make corrections to angles, you can store these corrections for that particular material type. This feature minimizes angle corrections the next time you use this material on another job.

The Pacific K-Series control system had limits of up to two ram axes and five backgauge axes. Automec’s PC800 is available up to 3 axes:

We recommend three axes to take advantage of the system capabilities. For example, with the R-axis, when the gauge fingers must pass closely over the top of the die, the PC800 will know from your tooling info that it should raise the fingers above the die as it moves in and then drops the fingers down on top of the die.

Automec designed the PC800 to work with all Automec backgauges, even older models. You can utilize most mechanical backgauges made by us as early as 1976.

You can view videos of the PC800 in operation here.

There are thousands of machine shops that have purchased standard Pacific J-Series or Pacific-K Series press brakes and are operating without CNC controls or systems. These machines have limited production abilities to take on larger or more complex projects. Today, the CNC is widely seen as a competitive advantage for most modern press brakes and comes standard.
The Automec PC 800 CNC System is an excellent option for both high and low tonnage Pacific Press hydraulic press brakes.
Contact us at:
PHONE: (781) 893-3403
FAX: (781) 899-5708