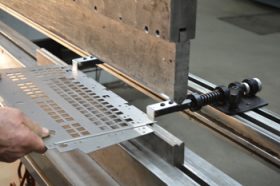 Simple mechanical pressbrakes dominated sheet metal bending in the 1950s.   Small batch production was the norm, and operators ran sheet metal through manual backstops where you had to set the gauge for each bend.  90-degree angles were the standard, and ram depth was static.  Operators made bends one at a time to a batch of parts. The position of the manual backstop was modified to perform another bend.  The process of resetting the stop for each batch left a massive backlog for the bending department.  Welders, grinders, and assemblers were left waiting for parts.  This production resulted in the low-quality output, part flow problems, and inefficiencies in the entire process.

The evolution of the Automatic Backguage

The automatic backgauge revolutionized sheet metal fabrication industry in the 1970’s.  At the core level, basic backgauges positioned metal such that bends are in the correct place.  The first automatic backgauges moved backward and forward along the X-axis to accommodate different lengths.  This change was a significant improvement as operators did not have to set the workpiece down after making a bend.  Operators finished bends in parts sequentially and could detect errors after bending just one test piece. If errors were detected, changes could be made to the press brake immediately.

Handling the part once meant that you finished the first piece quicker. Getting the first part done quickly alleviated the bottleneck allowing welders and assemblers to stop waiting so long for parts. 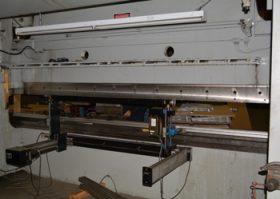 Hydraulic press brakes introduced a ram and controllable X, Y and R-axis. Controllable axis allowed angle changes from bend to bend without interrupting the production of a part. Hence operators could create bends at different angles without having to set down the workpiece to make adjustments to the gauge.

More gauging axes were added to hydraulic press brakes providing productivity gains for specific applications. For example, Z1 and Z2 allow you to move the gauging fingers left and right. Some systems offer R1 and R2 axes that enable individual fingers to go up and down independently. So the fingers can move separately left to right (Z1 and Z2), as well as up and down (R1 and R2) to correspond to the die with which you’re working. The benefits of each feature would depend on the type of applications needed.

New Ram parallelism offered the flexibility needed for more complex applications.  Newer pressbrakes provide the Y1 and Y2 axes and allow for control of the ram independently on the left and right side.  Additional Y Axis results in ram parallelism and extreme ram accuracy needed for more complex applications.   Operators can change the open heights, to take full control of the Y-axis in a program.

the bend sequence graphically.   Touch-based screens and an enhanced user interface simplified the process and reduced the probability of user error.

The Internet and computer networking have made it possible to monitor diagnose and control production remotely.   Sensors send real-time data about the angle enable immediate modifications during production.  Therefore computer-controls and optical sensors allow operators to make adjustments during the bending process without stopping production.

Fortunately, manufacturers don’t always need to replace their press brake to upgrade their production capabilities.   Backgauges can be retrofit into almost any press brake.   Upgrades are an affordable option for press brake control by adapting computerized gauging systems to existing press brakes.   Hence manufacturers can save substantial money when they opt to upgrade or retrofit older hydraulic machines using custom backgauges and computer-based software controls.

Electric Press Brakes are the future!

When it comes to accuracy Hydraulic press brakes, repeatability can only reach up to 0.0004”; whereas electric press brakes like CoastOne have an extreme precision of 0.000079 inches!  Also known as 1 micron!

Electric Press Brakes have a shorter cycle time and are easier to set up.

Complicated setups were possible with old equipment but were cost prohibitive and ineffective. The complicated setup times needed to have very long runs to justify associated costs.  However, with modern electric press brakes setting complex staged-bending solutions are no longer a challenge.

Electric press brakes can cycle up and down quickly, shortening bending cycle time for many applications.  The cost savings associated with shorter cycle time and accuracy are a significant impact on the ROI of an investment.   Productivity is also positively affected when it comes to preventing errors from miscommunication that can be the results from extended and complicated configurations.    Thus electric press brakes have improved productivity as a result of quicker setup and tryout times.

Electric press brakes and the future of sheet metal fabrication

While most agree that automatic backgauges revolutionized productivity in the sheet metal fabrication industry, some are starting to take notice that servo-electric press brakes have the potential to make the same impact.  We are at the beginning a new revolution where servo-electric motors are making significant advancements in safety and productivity for the entire industry.